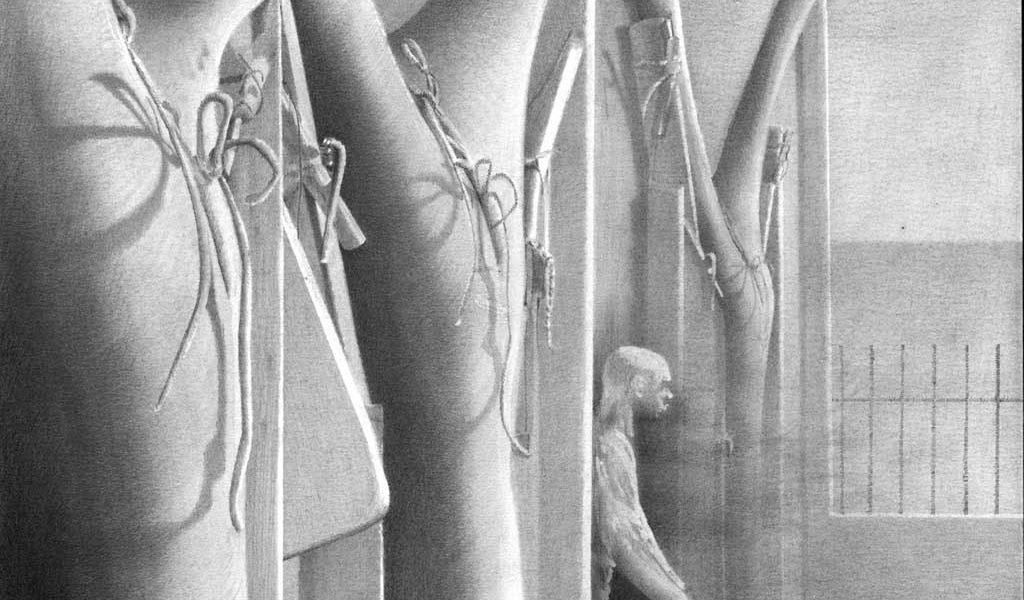 This collection of works inspired by the surrealist world brings together pieces ranging from dreamlike drawings to design of structural, architectural, and built elements. All in an installation that makes explicit a remarkable unity of the artist’s practice spanning nearly four decades. His work demonstrates the symbiosis of rational and non-rational thought using methods that explore and uncover the poetic and physical potentials hidden in everyday materials.

Mark West proposes methods for casting a new language of architectural and structural form, including flexible molds for columns, walls, beams, slabs, and compression shells, for both pre-cast and in-situ constructions. These are biomimetic constructions that use the mold’s flexibility to produce castings that follow more efficient, naturally curved, structural force-paths, producing highly efficient structural shapes, as well as complex curvatures of stunning natural beauty.

This exhibition tells a story about the intelligence of matter and its own spontaneous eruption into a form that produces a complex beauty through simple and primitive means. It suggests techniques for finding the unexpected in the ordinary. The scope of the work also demonstrates how creations in disparate scales, modes, and materials can inform each other. This intertwined series of subtle and unforeseen prototypes will be of particular interest to passionate makers, struggling with the confines of habit.

Concrete in All its Forms retraces the evolution of Mark West’s work from its earliest steps in surrealist paper collages, through his invention of “automatic” drawing techniques. These drawing and collage practices are fundamental to the discovery of ideas relevant to construction, architecture, and structural design.

Concrete according to Mark West
For the past thirty years, Mark West has been pouring concrete in flexible molds made with simple, flat, un-tailored, sheets of fabric. Replacing conventional rigid mold materials with light flexible fabrics utterly transforms concrete from the brutal and rigid material we know into a sensual and sensitive material, alive to its original wetness and plasticity.

This work has influenced a generation of practitioners across the world who are inspired by the vast potential his methods have unleashed. Architects, engineers, builders, artists, and academics admire his work for its originality, rigor, efficiency, and beauty. Central to Mark West’s technical work is a practice of speculative and inquisitive drawing.

The common thread that binds these disparate techniques together is a search for ways in which matter can be teased into acts of self-formation — guided by human artifice, but actualized by natural forces, events, and material properties. This body of work presents a manner of seeing and understanding the material world that rejects the idea of “dead matter”. Instead, matter and form are understood as being always prodigiously active, energized, and alive.

West’s insistence on the simplicity of means makes his technical inventions accessible to both low-tech and high-tech building economies and cultures. But this technical simplicity is not merely about being pragmatic. His choice of extreme technical constraints induces a kind of constructive metabolism capable of producing complexity from simple and uncomplicated origins — a hallmark of natural systems. What emerges is a composite form of ‘design’ where willful control and surrender to natural events occur in the same space at the same time.

Builder, artist, architectural researcher, and pioneer in the concrete exploration, Mark West began his working life as a carpenter, eventually studying architecture at the Cooper Union in New York City, before establishing his thirty-year career as a professor of architecture, with appointments in departments of both architecture and civil engineering at universities in North America and Europe. His work in the realms of both art and technical research has received international recognition through numerous publications, lectures, and awards. He was the founder of the Centre for Architectural Structures and Technology (CAST) at the University of Manitoba, the first academic research laboratory dedicated to fabric formworks. He is the author of The Fabric Formwork Book (Routledge, 2016). In 2017, he moved to Montreal to established his studio Surviving Logic where he continues his architectural and visual explorations as an independent artist and builder.